Senator Perry started his message by speaking about hospice care.

“If you do polling and understand where people would like to be at the end of life, it’d be at home or in a hospice like this,” said Senator Perry, who said that he was able to see the value of hospice care firsthand when his father passed away.

Senator Perry spoke about the hospice exemption for the recently passed Non-Opioid Alternative Requirement Bill (HB 451) before speaking about other Florida initiatives in which he is involved. Senator Perry’s message was followed by an inspirational speech by Dr. Scott Medley, a retired physician who is now an active Haven volunteer.

Dr. Medley said to the audience, “I have been referring patients to Haven Hospice for 40 years. You guys are terrific. Phenomenal. Throughout my career, at University of Florida College of Medicine, private practice, hospitalist, chief medical officer, I had the privilege to refer many, many dozens and probably hundreds of patients to Haven Hospice. In all my different capacities where I worked, I was able to see different aspects of Haven and you guys are wonderful.”

Haven is grateful for the support of healthcare partners, the local community and Senator Perry’s efforts in Tallahassee on behalf of hospice care. 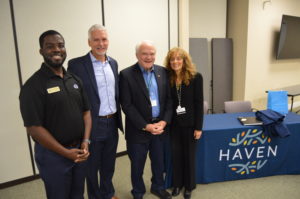