Thank you for the care and support our sister Dorothy Hennies received while being cared for by Haven at the Roberts Care Center in Palatka. Your care center is so beautiful and peaceful. May God bless you all.

Dear Haven Volunteers:
Please accept this heartfelt gratitude from my family to you. Thank you for the wonderful work you do for all the families who have lost a loved one. My children, grandchildren and I will have fond memories in the form of these bears made from John’s clothing. A piece of him left behind when he joined God in heaven.

– Thank you – The John Stover Family

I cannot praise all the nurses and staff enough for all you do. May God bless each and every one of these special people. Your kindness and sympathy are more deeply appreciated than any words of thanks can ever express. 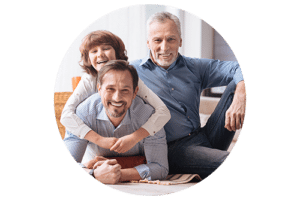 When Henry was first diagnosed with congestive heart failure (CHF), he and his family didn’t know what the next steps were. Their family physician recommended that they reach out to Haven for help. Through the family physician referral, Haven was able to offer Advance Care Planning and access to a Transitions program to Henry.

Through Haven’s Advance Care Planning program, Haven offered Henry opportunities for facilitated discussion with his family present about his healthcare goals, values and beliefs. During the discussions, Henry’s choices for current and future medical care and treatment were documented and shared with his physician. Haven also provided guidance in completing an advance directive which provided peace of mind for his wife, Barbara and their son, Robert. Henry designated his wife Barbara as his health care surrogate to make decisions on his behalf in case he became unable to make his own decisions. Now they wouldn’t have to make those difficult decisions if Henry became unresponsive during the progression of his illness.

Through the Transitions program, a Haven registered nurse referred Henry to a local, CHF support group. Haven also called Barbara and Henry to check in on how they were both doing. Robert was also able to take Barbara to get her hair done while a Haven Volunteer provided companionship for Henry for those few hours a week that they were gone.

Then one day, Henry was admitted to the hospital. Their hospital physician requested that Haven provide a palliative care consultation for Henry to help manage his pain and symptoms as well as clarify his goals of care. Haven’s Palliative Care Specialist talked with Henry and his family about the progression of his illness and the choices available to him. Haven recommendations for the management of Henry’s pain and shortness of breath were provided to the hospital physician. Robert was concerned about how this was going to be paid for because his parents were living on a fixed income. Haven explained that the palliative care consult is paid for by Medicare Part B, Medicaid and most commercial insurers.

Over the course of four months, Henry’s health deteriorated rapidly. The Haven Palliative Care Provider visited Henry in his home to evaluate the situation and discussed goals of care with him and Barbara. Haven arranged for hospice care for Henry. Now they could all focus on spending quality time with one another because Haven provided the comfort, care and compassion that they all needed. 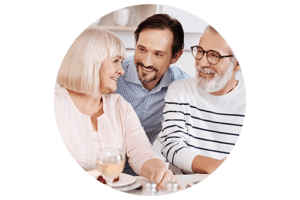 Henry served in the United States Army during the Vietnam War. At his request, Haven Veteran Volunteers came to his home to acknowledge his service with a veteran-to-veteran pinning. Robert was so proud of Henry, and Robert’s son had the chance to see his grandfather recognized. When Barbara and Robert had to go out of town to visit relatives, Henry received respite care at a Haven Hospice Care Center. Robert was relieved to learn that Medicare pays for respite care. During his respite care stay, a Haven Pet Volunteer visited Henry. He really enjoyed spending time with Zeus, a Labrador Retriever, who reminded him of his childhood pet.

Haven Walked the Journey with Henry and his Family

At admission to hospice, Haven volunteers and staff assessed Henry’s end-of-life needs and were able to look back to the documentation done in the Advance Care Planning stage. There were a few updates on how Henry wanted the last days to look like and volunteers and staff made sure that happened. As the end of life approached, Haven was there to answer their questions, hold their hands and be a supportive presence for the whole family as Henry passed on peacefully.

Surrounded by family, Henry passed away as he envisioned in his Advance Care Plan — at home and surrounded by all his family. Haven was there to assist Barbara and Robert in carrying out Henry’s wishes. A few weeks later, Haven followed up with Barbara who participated in bereavement family sessions with a Haven licensed clinical social worker. That summer, Barbara and Robert took Robert’s son to Camp Safe Haven. Supported by Haven’s staff and volunteers, they engaged in enjoyable and therapeutic activities to help them work through their grief as a family and remember Henry.
One year later, Barbara and Robert attended a Love and Remembrance event at their local Haven office/care center and had the opportunity to remember Henry and reconnect with Haven staff who walked that journey with them. They were encouraged to bring pictures and mementos of Henry’s, and they placed them on the Table of Memories. It was a beautiful event and anyone in the community who had lost a loved one was invited. Attending Camp Safe Haven and the annual Love and Remembrance event also offered them the opportunity to connect with other families who were experiencing grief.