Officer Damon Cole, dressed as Spider-Man, recently traveled from Texas to Haven’s E.T. York Care Center in Gainesville to visit a young patient. Officer Cole’s goal is to visit any child battling illness that wants to see him. He comes dressed as their favorite superhero to inspire them to never give up, while also building trust among law enforcement and children.

A police officer since 1999, Officer Cole deals with many children, often in less-than-ideal circumstances. He decided to have the Superman logo sewn onto his bulletproof vest to make a positive impact and show each child he came in contact with that police officers are there to help them through whatever they are experiencing. In 2012, Officer Cole began to dress up and visit hospitals and community events. He once dressed up as Iron Man for a boy named Bryce in Illinois. When he saw how happy he made Bryce and Bryce’s family, Officer Cole “knew he had found [his] calling.”

Since 2015, Officer Cole has traveled to 17+ states to visit sick children who wish to see him, while maintaining his full-time job as a police officer in Fort Worth, Texas. He has 13 elaborate, realistic superhero costumes that include his police department badge and patch so that the children and their families know he is a police officer. Officer Cole bonds with the children over his “super powers” and encourages them to never give up and to keep fighting for him.

Thank you, Officer Cole, for being a light for ill children in their time of darkness. More information about Officer Cole’s mission can be found on his website, “Heroes and Cops Against Childhood Cancer.” 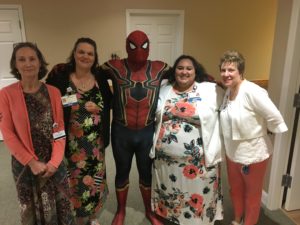