* * To protect the privacy of the deceased, we will be using the pseudonym “Joe” throughout this story.

Joe’s biggest concern was that his death wouldn’t mean anything. This Vietnam War veteran, who was in-and-out of homelessness his whole adult life and had no family, had not experienced much companionship in his life until it began to near its end.

Joe was admitted to Haven’s Suwannee Valley Hospice Care Center after residing in Lake City’s VA Domiciliary. Upon meeting him, Haven staff observed that he was lonely and depressed, and took it upon themselves to bring some love to Joe’s life. The first order of business was surrounding Joe with friendly faces. Haven Social Worker Jennie Lyons contacted the VA Domiciliary, who answered, “We’ll be there” without hesitation. The VA Domiciliary showed up with a busload of 13-to-15 friends to visit Joe, which brightened his last days.

Jennie, also a veteran, wanted to honor Joe for his service with the United States Navy. “He didn’t want formal veteran recognition. He came back from Vietnam in 1970-71 at the height of the public’s animosity toward the military, and didn’t want to be thanked because he didn’t feel it was sincere,” said Jennie. “I convinced him that veterans need to stick together, and he allowed me to perform a modified pinning ceremony.”

With only Jennie in the room, because Joe felt her sincerity, he was presented with a certificate of appreciation, thank you card, and pin for his military service. Jennie also performed a final salute.

As Joe’s health declined, Haven staff and volunteers ensured that he had someone by his side at all times. “The entire team at the care center, including the cook, took turns sitting with him,” said Jennie. “I came in on the weekends when there weren’t any volunteers available.” Lake City Volunteer Coordinator Lauren Pinchouck said volunteers from No One Dies Alone (NODA) — a Haven program with specially-trained volunteers to support patients without nearby family as end-of-life approaches— held his hand. “NODA volunteer June Branch was holding his hand when he died. He got to feel compassion at the end of his life.” 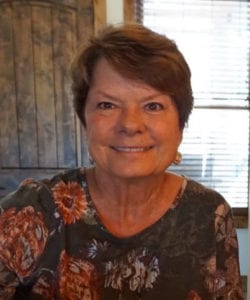 Pictured: Haven volunteer June Branch, a No One Dies alone volunteer who held the patient’s hand.

Haven successfully worked with ICS Cremation and Funeral Home to help claim Joe’s Unclaimed Veterans benefit through the Veteran’s Affairs. Joe will be interred, with dignity, in the National Cemetery at no charge.