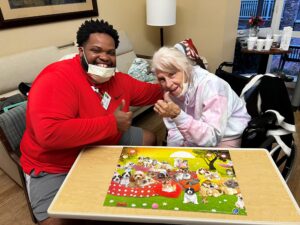 Haven associate Edward Spencer poses proudly with patient JoAnn Willis and a puzzle they completed together.

Patient JoAnn Willis arrived at Haven an emotionally distressed cancer patient, having recently had a difficult time at the hospital. She was agitated, refusing care and distrustful of everyone around her. A few Haven staff members approached her with compassion and dedication and were able to completely change the story for JoAnn, helping her find peace and reuniting her with family.

E.T. York Hospice Care Center Patient Care Manager Tootsie Young took a special interest in JoAnn. Their relationship began with Tootsie simply visiting JoAnn each day, sitting and calmly speaking with her, then finding a location at the care center in which JoAnn was most comfortable. JoAnn, still scarred by her negative hospital experience, was very distrusting, even of her own family, but Tootsie was gradually able to gain her trust. JoAnn began to accept care and take her necessary medications.

While JoAnn was doing better physically, she was still dealing with paranoia, thinking that her belongings weren’t safe. Even though Tootsie knew JoAnn’s belongings were completely safe, she found a solution that would put her mind at ease; she asked JoAnn to pack up her items and locked them in her personal office for safekeeping each night. She came in the next morning and delivered the belongings to JoAnn. Other staff, seeing Tootsie’s daily dedication to this patient, spoke about how quickly JoAnn made her way into Tootsie’s heart and the special relationship they built.

Tootsie noticed that the patient was not interested in typical activities like watching television, so she purchased jigsaw puzzles. Now that JoAnn was at ease, she began to trust other Haven staff members, especially Haven CNA Edward Spencer who visited her on each shift to provide care and work on puzzles. 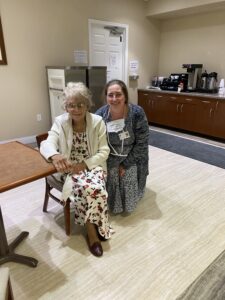 Tootsie Young smiles with patient JoAnn Willis during her time at the at the care center. 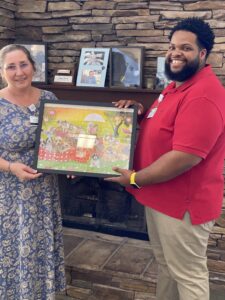 After an almost two-month stay, JoAnn no longer needed the type of 24/7 care required to remain at a hospice care center. Despite staff members’ many efforts, she could not be placed in a Gainesville assisted living facility. She began to convey a strong desire to return to Winter Park, FL, where she considered home.

Tootsie was instrumental in reconnecting the patient with her daughters. They were slowly brought back into her life, thanks to Tootsie’s communication and building of trust. Additionally, Tootsie advocated for JoAnn and organized temporary placement at a facility while the family prepared to welcome their mother home. The patient ended up going home to live with one of her daughters, who called with updates almost daily and still remains in touch.

Before JoAnn’s departure from the hospice care center, Tootsie notified Edward that she would be leaving. Tootsie knew he and JoAnn had built a special bond. Without hesitation, Edward came in on his day off to finish their last puzzle and say goodbye. JoAnn, a very stoic woman, had a hard time looking at Tootsie and Edward the day she was to depart Gainesville. But before she left, she left the puzzle with Tootsie and gave her a hug. Tootsie now has the puzzle framed and hanging in her office to remember JoAnn.

JoAnn’s daughter Terry reflected on her mother’s time with Haven, saying “She loved everyone there. Our family cannot thank you enough for what you did for her.”

Tootsie’s sentiment toward JoAnn is similar: “Our staff and volunteers made an impression on JoAnn, but we were also touched by the new friendship we were able to make. We are so grateful that we had a part in reuniting a family and helping to make last wishes come true.”

Haven’s leadership team said this story is a wonderful example of how Haven helped someone who, at first, was scared and distrusting. With love, time and patience, relationships were forged and what could have been an uncomfortable experience for a patient was turned into an outcome that everyone looks back on positively.

“Our staff was instrumental in loving that patient and bringing their family back together,” said Haven Director of Clinical Operations Brigid Doherty. “This is a prime example of the relationships built between staff and families at Haven.”