Patricia Coelho of Cross City, Chris Crane of Archer and Charles Roach of Old Town were recently recognized for their military service by Haven Volunteers Arlene Lang and Shirley Harrell. Born and raised in Massachusetts but moved to Dixie County to be near family, Coelho served in the Unites States (U.S.) Army for four years in communications. She has three daughters, and one of her daughters served 20 years in the U.S. Air Force. After she served, Coelho volunteered at the USO at Westover Air Reserve Base as a chaplain. Crane served in the U.S. Navy on the USS Charles F. Adams in communications. Married for 40 years, Crane is a native Floridian and moved to Archer to be near his two sons and two grandchildren. Roach is a U.S. Army veteran who served in France, Germany and Italy during World War II. Employed as a welder with Goodyear in Ohio after the war, Roach moved to Florida in 1972. The Haven Pinning Ceremony for veteran patients also includes a veteran pin, a thank you card signed by the staff and a certificate of appreciation from Haven which are all presented by volunteer veterans. The presentation ends with a salute to honor the veteran’s service. 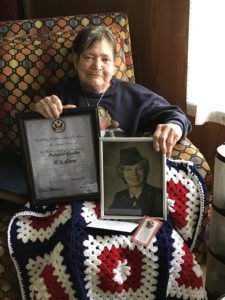 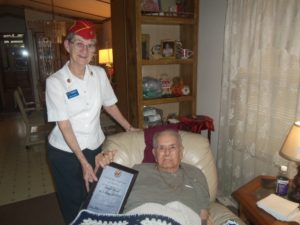