Haven Hospice staff reunited a hospice patient with his family virtually after years without contact.

According to Haven social worker Katie Alpahando, patient Robbie Matthewson was depressed, even before he entered hospice care. She said he was alone and scared and that everyone at Haven worked really hard to gain his trust. In getting to know Robbie, who was referred from the Daytona area to Haven’s Roberts Hospice Care Center in Palatka, the team learned that he was disconnected from his family in Ireland.

Robbie, 61, had been in the United States for 30 years but shared that he lost contact with his brothers and sisters in Ireland. Haven LPN Rachel Reidenbaugh took the initiative to reach out to some Irish families that she had reason to believe were related to Robbie. After multiple tries, she successfully reached Robbie’s sister-in-law Sharon who lives in Derry, Northern Ireland. Sharon said she and her husband Hugh had been trying to reach Robbie for years.

“About six months ago I was in bed sleeping and I woke up and I had a really bad feeling about Robbie,” said Sharon. “I came down the stairs and I was sitting here, and Hugh came out of bed, and he said to me ‘What’s wrong?’ I said, ‘I have a really bad feeling about Robbie.’ We thought he had died, and it was just a feeling that I had got. I said to Hugh, ‘If we’re meant to find him, we’ll find him.'” Sharon continued to tell Rachel, “Then six weeks ago, we were driving when my phone pinged, and it was you, Rachel. You are an angel sent from God because if it wasn’t for you, we would have never found him.” 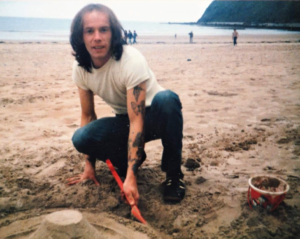 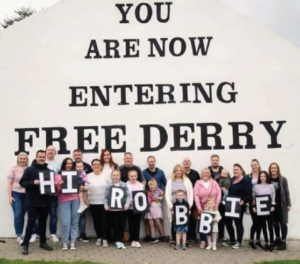 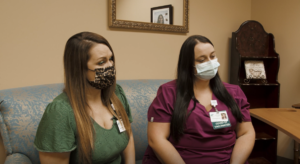 Katie said that caring for Robbie, and keeping him connected with his family, was a Haven team effort. “The collaboration efforts where amazing. When you think about working on an interdisciplinary team and how it should function, this is exactly how it should be,” said Katie. “I would find out sometimes that there was a need, and then I would bring it to the team, and we would work together to make those things happen. These are the types of situations that you go into this field for. It’s to make a difference, to truly make a difference. I do feel like we were able to make a difference not only in his life, but in his family’s. Sometimes you don’t know the impact you have on someone until years down the road, but this family was able to sit there and tell us how it changed their life.”

Sharon did, in fact, say that this encounter was life-changing. “I don’t think you realize how much you’ve done for us as a family. I don’t think you realize what you’ve done for us is a miracle. It really is because we would have never been able to find him,” said Sharon. ” We’re at great peace knowing that you are all there looking after him and that he’s not on his own and that when he passes he’s going to have somebody there.”

Robbie died a few hours after this interview with his family and Haven staff. Haven LPN Rachel Reidenbaugh connected Robbie’s family with a local Florida funeral home that collaborated with an undertaker in Ireland to make sure Robbie’s final wish– to make his way home to Ireland– was granted. He was transported to his family and they were able to hold a proper Irish wake and funeral.