Chris Russell, Haven’s Hospice Director for the East Region, was awarded the Patriot Award by the Employer Support of the Guard and Reserve (ESGR), a Department of Defense agency.

The individual award is given to employers who are supportive of service members. An employee serving in the National Guard or Reserve can nominate his or her supervisor at work for the Patriot Award.

“I try to be supportive of reservists as a supervisor,” said Chris. “I always try to make sure they have time off after deployment before they come back to work.”

Doug Corbett, an ESGR chairman and retired Army sergeant, presented Chris with the Patriot Award. He says 50 percent of the armed forces currently serve in a Reserve component. “These part-time warriors work full-time and are part-time Reserve. When they get deployed, it’s a sacrifice for the employers as well as the individual,” said Doug. “Some employers aren’t understanding, but in Chris’s case, he follows the law, doesn’t harass anyone, and supports his employees, which is why we wanted to recognize him for his outstanding support.”

Chris supervises multiple Reserve members and said he appreciates ESGR’s recognition. “It was really nice to be recognized outside of Haven,” said Chris. “You don’t realize that what you do day-to-day at work has an impact outside of the organization.” 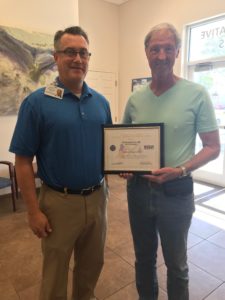